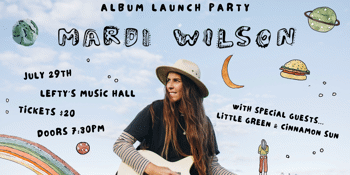 A raw and authentic one person show, Mardi Wilson is making waves in the industry with her unique surf folk style and emotive lyrics. From an early age, Mardi enjoyed writing lyrics and poetry but was introduced to the world of music when she started drumming at the age of 12. Now, Mardi now incorporates guitar, vocals and foot percussion into her live performances.

Mardi has spent many months touring Australia. In between shows in capital cities and regional towns, Mardi hops between campsites in her home on wheels, gaining inspiration and connecting with nature. In May this year, Mardi released her debut album "Get Lost" which received a 5 star review in the Sydney Morning Herald "Sweetly soaring and escapist- this perfect Australian album demands attention" (Jessie Cunniffe).

An energetic and captivating solo performer, Mardi is constantly inspired by the people in her life and her natural surroundings to create music that continues to resonate with audiences as she travels and plays.

Little Green is the alter ego of Sydney based singer-songwriter, multi-instrumentalist and producer, Amy Nelson. Growing up in the Blue Mountains, Amy developed a childlike sense of storytelling and serene musicality inspired by the nature around her. Self-taught on flute, sax, guitar, piano and vocals, she has used her skillset to create a compelling live show, start a popular mini beat series online, and collaborate with some of Sydney's best up and coming producers; her most recent releases being supported by Triple J, KIIS1065, TEDx Melbourne, MTV and more. An emerging female producer in her own right, Little Green's track ‘The Night’ received stellar reviews on Unearthed, her ‘sweet folky vocals’ and ‘mature production’ sending her to the top of the charts and earning her a premiere on Triple J.

Cinnamon Sun (FKA Davy Simony) is a Brisbane based folk-roots singer-songwriter hailing from Kuranda in Far North Queensland. With influences that span from Angus & Julia Stone to Fat Freddy’s Drop, his work is defined by his grounded and heartfelt style of songwriting. His live performances are not to be missed: boasting the powerful energy of a ‘one-man-band,’ Simony takes to guitar, foot percussion and live looping.

A true prodigy, Davy began playing music at just eight years old. By fifteen he was writing his own songs and busking on the streets of several nearby towns. After moving to Melbourne his music career skyrocketed: Touring nationally and internationally, playing festival shows and opening for acts such as Tash Sultana and Daryl Braithwaite; but still to this day you can find him busking on the street. “I feel like I will always come back to busking. It grounds me and humbles me, and at the same time makes me work harder and improves my skills- you have to catch the attention of people walking by- draw them in, captivate them. That’s why I love busking and that’s why I think it’s the best practice you can get.”

Davy has released 3 EPs under his own name and one single under the new name, Cinnamon Sun. With a strong following across Australia and regular spins on Triple J, the future looks promising for this young artist!

“Like drifting off into your own imagination, Cinnamon Sun is the kick-off into a blissful existence. Understatedly poetic and great, you can’t go wrong with these cats” - Nkechi Anele (Triple J)